What does IKR mean? Does it mean I Know Randy? Does it mean I Kindly Regard? When someone uses the acronym "IKR" in a text message or digital communication, it can be difficult to understand to full context.

Learn what "IKR" means in this short guide... 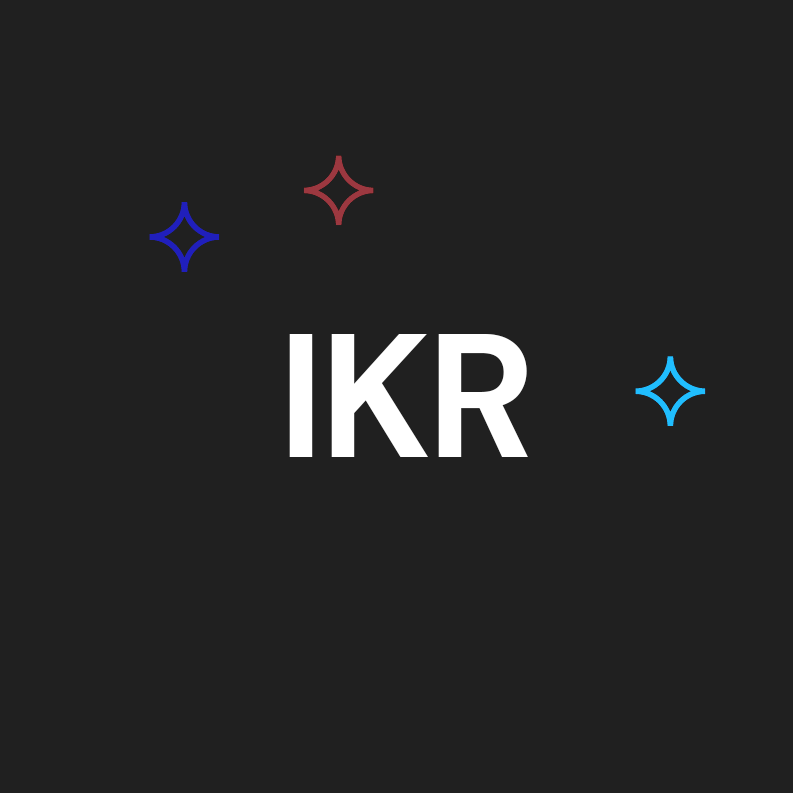 "IKR" means "I know, right?" It is a common way of agreeing with someone in a conversation. Typically, it is said in response to being in agreement with someone's opinion. The "IKR" acronym carries a stronger connotation to it. Usually said in conversations where there is some type of irony.

Using "IKR" is not rude. It is typically used in response to a statement. Although, it could be used in agreement with a rude statement. For example, in the movie Mean Girls, Lindsay Lohan says, "She's such a dirty pirate." And the actress playing MacGarnacle responds, "IKR?"

The movie depicts a "Valley Girl" using the internet slang acronym in a rude setting. Where the other valley girl decides to wholeheartedly agree over something negative.

In that setting, the person is responding to a negative or rude statement. And the abbreviation "IKR" is getting used to join in being rude to another person. 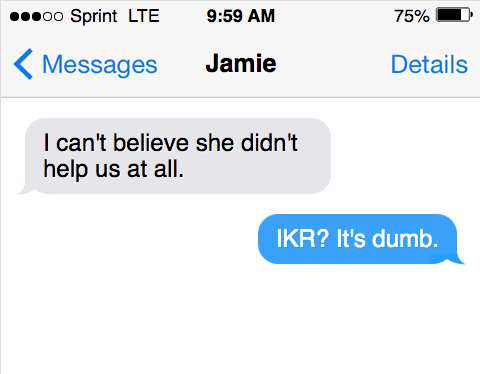 Should I use "IKR" at work?

Typically, "IKR" is used with either a question mark at the end or an explanation point at the end. Here are a few examples:

Typically, capitalization of the entire acronym is the correct way of texting the comment. 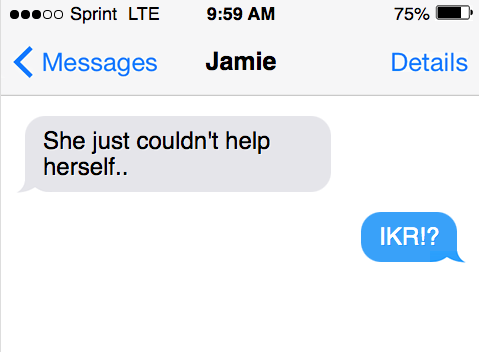 Urban Dictionary dates the use of "IKR" all the way back to 2005, with popularity of the term increasing in 2011. It has always had a meaning of agreeing with someone or having the same beliefs about a topic, situation, or conversation.

Example uses of "IKR" in a text conversation

Here are examples where "IKR" is getting used to agree or as a supportive statement to the other person in the conversation.

Friend 1: "I don't know how we are going to pass this test. I feel like we didn't get the opportunity to prepare at all."

In this example, the second friend is agreeing with the first friend. This could be over online chat, text conversation, or other digital communication.

Friend 1: "I don't know why we have to work out so much for volleyball. It's not like we have to move all that much when we actually play?

This second example shoes the person using an exclamation point to emphasize the agreement of the statement. It is getting used to short form the phrase, "I know right?"

Friend 1: "I can't wait to have this birthday party with you, it's going to be so fun!"

The last example shows a friend in agreement with something positive rather than negative. Typically, this would take place through electronic communication of some sort. And conveys a sense of excitement rather than a sense of relief in other settings. 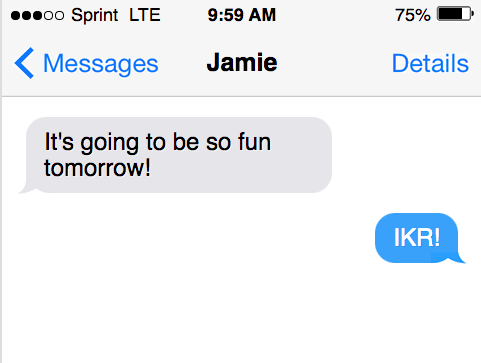 When using "IKR" you will want to ensure that you are using the acronym in ALL CAPS rather than any lowercase letters. Typically, the abbreviation will not have a comma in between the "know" and "right" words.

Unlike the correct way of saying, "I know, right?" The acronym omits the comma.

How do you reply to "IKR" in a text conversation

When someone is using "IKR" as a response to your idea, it is confirmation that the person has a general sense of agreement with you. Though, how should you respond if you'd like to continue the conversation?

To respond, simply say one of the following:

Other similar short forms and acronyms that could get used in a text conversation:

IDC: A pretty straightforward way of saying, "I don't care." Which is a negative response to someone's thoughts, opinions, or ideas.

IDK: Which stands for, "I don't know." This is a response to someone that unsure of the opinion that is getting shared. Friends could text the response, "IDK" when they aren't entirely sure if they agree with the other friend.

"IKR" is most commonly used to agree with someone in strong emphasis. It is used to save the writing time and keystrokes associated with saying, "I know, right?"

It is a strong sign of agreement with friend, family member, or another informal party. It is rarely used in business settings. And should not get used when having formal communication.

Punctuation of the acronym is typically concluded with either question mark or exclamation point to provide emphasis. Or a combination of both to show heavy emphasis.